Well, time has escaped me this past week.
I've been about, but just lacked the energy to post :(

On to the positives in life though :)

We have our budget totally sorted. I mean properly now.
And I have also started the £2 sealed pot challenge- I've been doing that now for two weeks -the same as our budget.
Here's my pretty pot :) 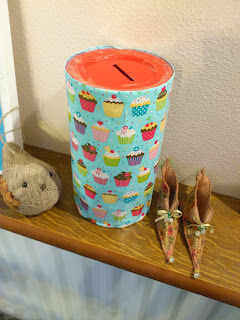 It was a twiglet tub from Christmas.  I shall be hopping over to SFT's blog later to see if it's not too late to join in the party!

Each week we have £120. for all out groceries and toiletries. I also have an extra £20 'buffer' which I keep in another decorated pot for ﻿if I see any 'buy one get one' offers that have to be taken advantage of, and make money sense.  This buffer is to save me using up money from that weeks budget that has been allocated elsewhere on the shopping list.

But saying that, this month I have bought a years supply of the following:
Juice and school juices saving: £130.00
Kitchen towels saving: £16.80
Cleaning products and fabric conditioner combined saving: £21.60
So my total saving for the year -this month is
£168.40   !!!

This is an excellent start to the year that I'm really pleased with. And before you think "oh well, that's adding extra each week to your budget as you already have those things in stock".  It isn't.
Each week off the budget, I take away the amount of money that these things would have cost me that week was I to buy them not on offer.
So this really is saving us money. As at the moment my weekly budget is down to £104.34 once I have taken off what I would have spent on that item for that week.
Does this make sense? lol.

And all the above items were half price or less in Li*l, Sain$burys and Te$co.

I'm trying to cut back on diesal consumption at the moment... I only wish that we lived nearer to the schools and shops so that we didn't have to drive everywhere. We have to have a car though for our eldest :(

Do you know what you're eating?

Well, me and my Miss 13 have been looking forward to tomorrow ALL winter :)
SNOW is forecast for this part of Dorset (along with most of the rest of the country I might add!)
I do like snow. I think it's because it always reminds me of my childhood﻿.

Snow used to pour down outside; great big huge flakes that settled and gave you loads of hours of snowballing and sledging fun on big black sacks. (Along with a sore bum after, freezing red chapped legs and a real struggle to get your soaking wet jeans off!)
You remember don't you? :D
Oh, but then you settled down in front of the roaring open fire with a nice hot cup of chocolate, the toasting fork, wedges of uncut bread to toast on the fire, the salt celler and.....erm.....the-dripping-bowl -to-spread-cold-animal-fat-on-your-toast with a sprinkling of salt after...Yummy (at the time!)
Saying it quickly, it doesn't sound so yuck now. LOL

I've been a vegetarian for about 18years now - since my early twenties, and some of the things I used to eat in my childhood just don't sound nice to me now. Except I do know that everything I had was home cooked, and half the time, home killed as well.
My dad used to breed rabbits for us to eat, we had pheasants, brawn (pigs brain ..Urgh..) pigs trotters, whelks, winkles. And all manner of things that I now think yuk too.
But the point is, you actually knew what you were eating!
We never had 'fancy' stuff like beefburgers, lasagne, bolognese. But we did have home made mince meat in shephards pie and the like. -You know, good old fashioned English food.

I had 'older' parents who had lived through WW2. My dad being in the navy, and my mum being evacuated to Wales.
We always had a larder filled with homemade jams and jellies, chutneys and pickles.
A garden full of home grown veg. (Gardens were bigger then too, so most of the time in the country you didn't need an allotment).
There wasn't anything that was wasted at all.

We had big chest freezers full of food. Most of it was in big lumps of meat, fish and preserved veggies for the winter from the garden.  Two exceptions of 'fancy' food were baked beans, and fish fingers.( I had them round a friends house once when I went for tea, and begged my mum for them after that :)

I'm not really sure whats promted this post, except for maybe a couple of articles in the news lately.
The first article is that as humans on this planet, we waste a staggering 2billion tons of food a year.
When I think how I grew up, I was the most wasteful finicky child out (I mean do you blame me? Come on, there are only so many rabbit stews, pigs brain and pigs trotters one young girl can eat!! lol).
My dad was forever telling me how 'children in Africa would fight over my left overs", and my retort was for him to send them to Africa if he wanted!!
And second, is the saga about there being horseflesh in certain burgers. I mean, if you have meat, and that meat comes from a herbivore isn't it all the same?
As far as I'm concerned, if you're going to eat a cute little chicken or pig, then why not a horse?
(And I do speak from someone who used to have a horse and love all animals as well!)

We didn't stop eating meat just because of the cruel way that some animals are treated in their short lives. If that were just the reason, we would also stop drinking milk and eating cheese. It was mainly because we were very, very  poor when we first got together. We didn't have the money to spend on big expensive chunks of meat, so we had to buy cheap mince, burgers, sausages etc.. And we didn't like the thought of not knowing what was in our food.  Especially when eating 'chicken' burgers, you would come across a big piece of grisle or a huge bone!) We also realised that with most of the meat we ate, we had numerous sauces and pickles with it to disguise the flavour of the meat and make it taste 'nice'. You know, more palatable.
Like with burgers when you add lots of tomato ketchup and gherkins. Roast beef when you add lots of horseradish and mustard. It all hides the flavour of the meat.
Which I suppose comes down from our forebears when they 'invented' sausages with all the herbs and spices in to hide the flavour of rotting meat.

Now, I know that of the people who have started to read my blog, most of you are the frugal ones, who like us are trying hard to be savvy with your food and savings. And I'm by no means trying to 'convert' anyone to vegetarianism.  I just wanted to have a chat, and ask you to think, I mean really think about where you get your meat from, and whats important to you about your diet.
Do you like the sauces?  Or do you like the meat?
What do you think about eating horse meat?  Or any type of meat?

Have a great day tomorrow, and wrap up warm folks.

P.s. If you've got this far, thankyou most kindly for reading my ramble :D :D

We're still scrimping by :)
I've worked out our meals until Tuesday with a minimum spend. On Tuesday I'll have a small amount of money to draw out, so, that again will be split between diesal and neccesities.

Just need a couple of items for the ingredients to these, and some loo rolls :)

I had to make some rolls yesterday for the kids packed lunches. 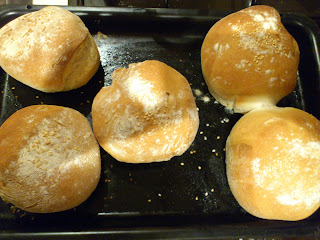 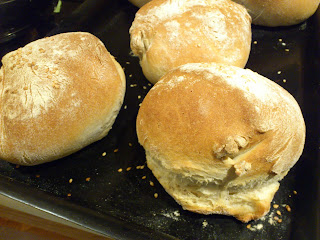 They turned out beautifully if I do say so myself. I don't often make 'white' bread, as we much prefer wholemeal (apart from Miss 17!) but these were yummy.

I also made my homemade potato salad to go in the rolls with sliced quorn.
I don't have a recipe as such, but use left over potatoes, spring onions or chives (or any garlicky or onion greenery you have growing in the garden!)
Add a generous dollop of mayonaise, a really good squirt of salad cream, and I always put in either a small teaspoon of mustard powder, or a squirt of mustard depending on what we have.

Give it all a good mix. Preferably leave overnight ot let the flavours mingle...
And....

Remember this is good for using up those left over cold spuds, or ones that are sprouting in the veggie basket. Wait till they go cold though before mixing in the sauces.

I used two spring onions for these few spuds, but you just really add everything to taste :)

Today was a no spend day, but tomorrow won't be.

I was going to take Miss 17 for a long walk this afternoon, but alas, her seizures have declared otherwise. :(

Have a good weekend folks

Not quite as hoped!

Well, the New Year budget hasn't started off quite as hoped, but in the long run this is saving us money.
Due to circumstances beyond our control, we aren't able to start the grocery budget challenge until 28th January. Until that time we are officially scrimping :(  But as I said, this (although not a good way to start the New Year) will save us more money in the long run.

So any money we have whatsoever at the moment is being pooled to pay for diesal to and from school (our Miss 17 is disabled, and has to be driven.) and just basic food stuffs...if it stretches that far!
Unfortunately I made sure we emptied the freezer and store cupboards before and over Christmas so that we had a fresh start in January! So that doesn't help either.  Sods law eh?

I've made my sealed pot, for the sealed pot challenge on frugaldom. Alas it will have to have a rumbly tummy till 28th when it will be launched and shown of to the world.

On a good note, I have given the little boys quilt I was making to his Mum whom I think was happy with it. I could just imagine him snuggling in it during his hospital stay and subsequent weeks recovering from brain surgery. 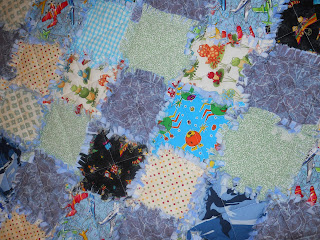 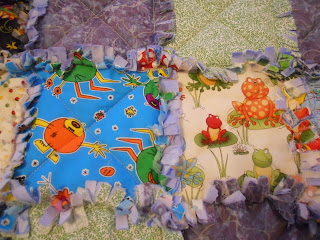 But now that the quilt finished, I can start making and listing some bits for my new etsy shop which is good news for my money making 2013 challenge!﻿

And on the positive side I've been cycling and walking with my girls towards my weightloss and fitness challenge too, so that's started off well.

Anyway, I have cleaning to do today :)

I'm trying to be very frugal this year, and hope to save quite a bit of our money towards our 'own' home.
I shall be monitoring my progress on this blog, so that I can keep keep records of what's going on (and what's being spent where!).﻿

These are some of my plans for this year....

Well,  I think that's enough to be getting on with. I just hope that I mange to keep track of everything on here :)